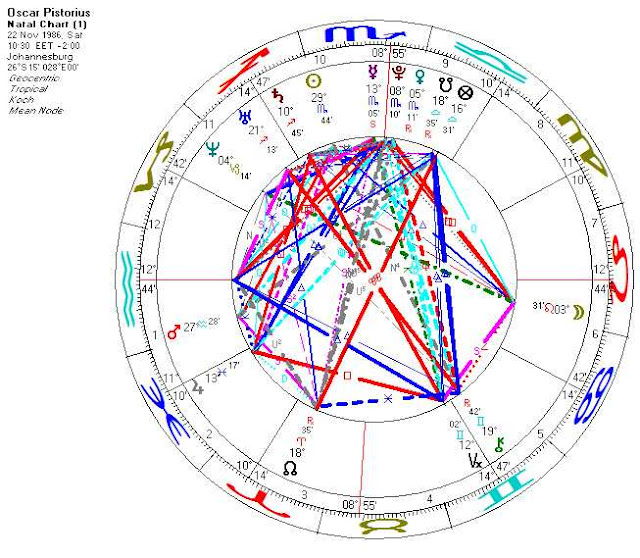 Fascinating chart! Ascendant and all personal planets are in fixed signs suggesting incredible strength and tenacity. Following the recent charges of murdering his girlfriend, Reeva Steenkamp, on Valentine’s Day there is no surprise to find a Scorpio stellium at the height of the chart around the MC.(Hero to Murderer overnight!) Karmically, the Sun is on the degree of atonement for Scorpio, (exact midpoint of Pluto and Uranus), Venus is Retrograde in Scorpio (Detriment) and Mercury is at the height of its station in Scorpio. Publicly he has endured years of political battling to fight for the right as a disabled athlete to compete in able-bodied competition. On a personal level it could be imagined that there would be karmic themes around misuse of power and control within volatile relationships. This is further emphasised by Natal Pluto conjunct Venus, Square Moon in Leo. Over-dramatic behaviour may not be uncommon in his relationships displayed by power struggles or violent outbursts. He was previously charged in September 2009 of the assault on a friend.(Charges later dropped). He is quoted as saying his much loved mother had the most influence on his life and he has her birth and death dates tattooed on his inner arm. However the difficult aspects to his Moon may have deeply affected his ability to relate. With such significant energies in Scorpio there may be a fascination with death, sex and a strong survival instinct. Neptune is connected too, being inconjunct Moon and sextile Venus. This could indicate themes of loss or lack of trust with loved ones possibly resulting in intense jealousy and frustrated efforts to try and control events by controlling them.

With Moon in Leo out-of-sign trine Sun in Scorpio the immediate impression is one of tremendous energy and internal resource having immense power to influence people. Additionally Mars in Aquarius in a tight square to the Sun (1st to 10th House) suggest a determined character capable of creating action and reaction in their wake. On the negative side this could result in impatience and recklessness (he was charged in Feb 2009 of reckless driving and crashing of a boat, resulting in Pistorius being hospitalised with facial injuries). On the positive side, this placement could suggest the drive for equality and human rights of disabled people. A deeply complex individual with strong intense emotions & maybe capacity to punish themself with equal intensity. There is suggestion of enormous power of will and self-control, but negatively this could be displayed in ruthless behaviour in pursuing what the mind is set on.(for example success, power & fame) This placement may also be symbolised by Oscar’s interest in firearms. Pluto and Mercury are conjunct the MC suggesting a enthusiasm and magnetism, a compelling communicator with a penchant for leadership.

Tattoo on back is the Bible verse 1 Corinthians 9:26:
“I do not run like a man running aimlessly”

Disabled from birth, Pistorius has his Chart Ascendant in Aquarius,a natural outsider both seen as and experiencing the world in an unusual way. The ruler Uranus is in Sagittarius in the 11th house opposite Chiron in Gemini in the 5th is interesting and forms a T square with Jupiter in Pisces in the 2nd house. Forming normal friendships may not have been easy as there may have been a sense of somehow being different to others and there is some suggestion of wounds around love affairs. The Jupiter in Pisces placement suggests a vulnerability to being hurt and at 13 degrees is both Square to Uranus and to Saturn in Sagittarius. The further placement of the Saturn on the 11th house cusp further adds speculation to potential difficulties in forming friendships. This T Square was significantly hit by transits on his mother’s death 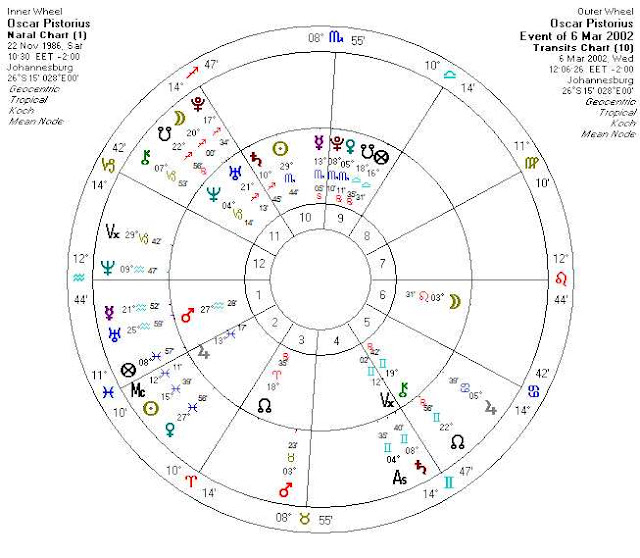 It could be imagined that with Jupiter Trine to Mercury and Pluto a defence mechanism for any hurts and insecurities could be obsessive manipulation and control.

As a second chart ruler Saturn draws in Sun and Uranus as it is exactly midpoint. Pistorius’s father left home when he was 6 years old. Transiting Saturn that year moved over and then retrograde over his ascendant in Aquarius. Saturn is also significant in transit in the death of his mother where it was exactly inconjunct to the MC/IC Axis opposite its natal self and inconjunct to Pluto: pretty heavy stuff!

At the time of the alleged murder of his girlfriend transiting Saturn was conjunct to and at the midpoint of natal Mercury and Pluto. 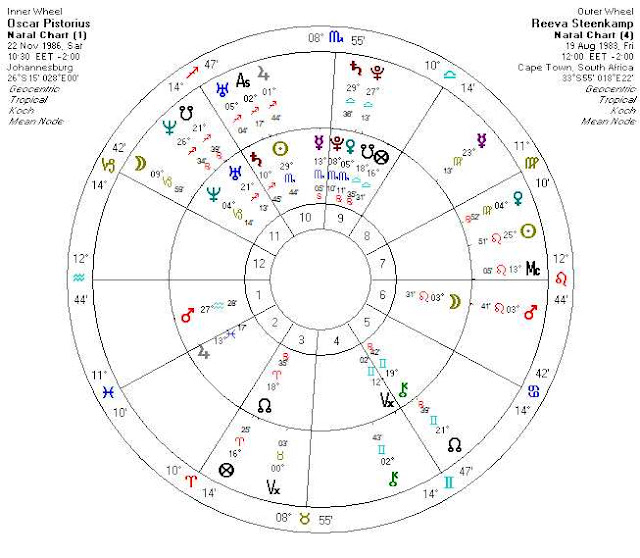 With Reeva’s Mars exactly conjunct Oscar’s Moon she would have had a profound emotional effect on him. With her Mars in Leo in midpoint trine to Natal Jupiter and Uranus in Sagittarius it could be guessed that she could have been feisty in matters of independence and fairness. This Mars placement plugs into Pistorius’s emotional own possible obsessions around relating. (Moon Sqare Venus & Pluto). Her Sun and Venus fall in his 7th house and he would have experienced her as a potential true life partner. However Reeva’s Sun is opposite Oscar’s Mars and Square his Sun. This could have made for strong attraction but for a fiery relationship. Further unpredictability in the relationship are suggested by the placement of Reeva’s Uranus at the midpoint of Oscar’s Sun and Saturn. Karmically Reeva’s South Node is exactly conjunct Oscars Uranus and her North Node is conjunct his Chiron suggesting the shocking events of Valentine Day will never heal either of them. Incredibly, Reeva’s Venus is also retrograde and sextile to Oscar’s retrograde Venus. (Since Venus is retrograde only every 18 months for 6 weeks the probability that 2 people both have retrograde Venus let alone in close aspect to each is very slim.) This would suggest a karmic connection between them on the surface experienced by harmonious tastes and shared values. However Reeva’s Venus is additionally square Oscar’s Sun and she may have experienced his personality as overpowering at times and he may have felt that he was losing his identity with her.

Both her retrograde Venus and her Mercury in Virgo activate Pistorius’s Mutable T square between Saturn, Uranus, Chiron and Jupiter. As her birth time is unknown, Reeva’s Moon could be anywhere between 4 and 15 degrees Capricorn. It is likely that her Moon was conjunct his Neptune, if so there may have been themes around idolisation, martyrdom, deception and trust.


Oscar Pistorius and Transits of the Alleged Murder 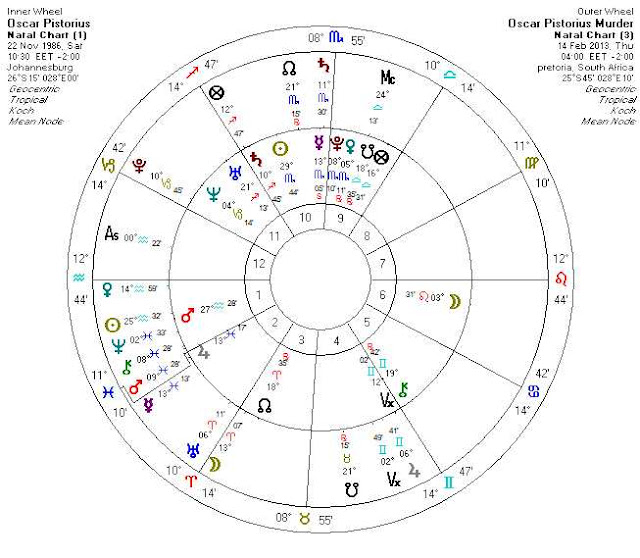 According to neighbours they heard angry shouting at the home of Oscar Pistorius and then 4 gunshots at about 4am. (Transit Chart has been elected for 4am ). It has been reported that Reeva was shot through the bathroom door. Oscar’s defence Lawyers are contesting a case of mistaken identity whilst the prosecution will be arguing a case of premeditated murder.

What is striking about the event chart that there are similarities to the one for the death of his mother. In this one the mutable T square is activated again with Transiting Mercury exactly conjunct his Natal Jupiter and Transiting Mercury.Mars and Chiron are Square Oscar’s Natal Saturn. This may suggest that Oscar’s buttons may have been pressed in themes of old wounds, insecurities and possibly mistrust. Again in this event chart like the death of his mother his Mars Sun Square is being activated in this case by the conjunction of the Sun. (The Sun at this time was also exactly opposite Reeva’s Natal Sun to the degree.) As previously mentioned transiting Saturn had entered the 10th house midpoint to Oscar’s Natal sun & Mercury in Scorpio again possibly triggering insecurities and dark themes.(Sex / Power / Control) With the transiting Nodal axis falling in his 10th house too there is no surprise that his true personality has come under the attention and scrutiny of the World.

At the present time the future looks bleak for Oscar Pretorius if found guilty he could be jailed for life. His Nodal Axis suggests a life path endeavouring to communicate his true self-identity (North Node 18 degrees Aries in the 3rd house) and this will receive considerable stress from transiting Pluto and Uranus over the next few years. Additionally Pluto will be entering into a 20+ year stint in the 12th house - maybe a time for considerable psychological growth.At the moment there is no suggestion of drugs or alcohol being involved in the valentine's day events.However Oscar's natal Venus is sextile his Neptune suggesting there may be such a theme within his relationships. His progressed chart is fascinating, with Mars exactly conjunct Jupiter at 15 degrees Pisces square a stellium of planets in Sagittarius and opposite Chiron in Gemini, once again triggering the natal mutable T-square. Does he attract / is attracted to partners with strong Neptune qualities ? (Reeva had a tight Sun Trine Neptune) & if so does this make him feel out of control? However, whatever transgresses one gets the impression that there is yet much more to come in the fascinating story of this unusual young man.


Asked once about his chief ambition by the Financial Times he replied:

Kieron Le Grice talk at the Consciousness Cafe in Totnes

I've recently been in contact with Kieron Le Grice and found out that he is giving a talk down here in the South West. Some of the Exeter Group, and indeed Plymouth and Totnes, might want to attend. Thursday 28th March 2013, at the Consciousness Cafe in Totnes, 7.30pm for 8pm. Finishes at 10pm. Donation only and the venue has recently moved to the Function Room of the Dartmouth Inn, Warlands, Totnes.

If you are coming please confirm by emailing Wendy: <wendystt997@googlemail.com>

Dr Keiron Le Grice on ‘Rediscovering the Gods: Archetypal Astrology as a Guide to Psychospiritual Transformation’

Individuation, as described by Carl Jung, is a process of deep psychological transformation leading the individual towards the realization of the Self—the organizing center and the totality of the psyche. As Jung and Joseph Campbell have demonstrated, the sequence of transformations occurring during individuation is symbolically portrayed by myths of the hero’s journey. In this discussion, by exploring connections between archetypal themes in human experience and particular planetary alignments in astrology, he will present the case that astrology can be used to help illuminate the dynamics of individuation, serving as a guide to one’s own heroic journey.

Keiron is a guest lecturer in Jungian and Archetypal Studies at the Pacifica Graduate Institute, California, and adjunct faculty in the Philosophy, Cosmology, and Consciousness program at the California Institute of Integral Studies, San Francisco. He is the author of The Archetypal Cosmos: Rediscovering the Gods in Myth, Science and Astrology and Discovering Eris: The Symbolism and Significance of a New Planetary Archetype. He is also founding editor of Archai: The Journal of Archetypal Cosmology. His latest book, The Rebirth of the Hero: Mythology as a Guide to Spiritual Transformation, will be released later this year. Keiron currently lives in Wales with his wife and son.