Pholus: lid on, lid off and in the Underworld

The Centaur Pholus has a very elliptical orbit which takes him from the realm of Saturn to that of Pluto, crossing the orbits of Uranus and Neptune as he goes. So he covers a lot of territory and has contact with several of planets on the way. 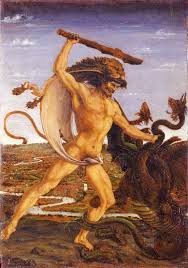 Melanie Reinhart uses the phrase 'the lid comes off' for Pholus. That relates to him being the Keeper of the Sacred Wine Jar (given to him by Dionysus) which had been kept sealed for four generations – a reminder that all Centaurs have an ancestral dimension. The story of Pholus and his downfall is that Heracles came to visit one day and Pholus took the lid off the jar to give some to Heracles. Chaos ensued! The wild centaurs smelt the wine and became intoxicated. They came thundering to the cave and began to hurl rocks and tear up trees. Heracles got out his arrows and started to fire them into the centaurs.  They dropped like flies because the arrows had been dipped in the blood of the Hydra, which was deadly poison. The remaining centaurs fled with Heracles in pursuit. Pholus, left behind to clear up the mess, pulled an arrow out of one of the dead centaurs and examined it, marvelling at how such a tiny thing could fell such an enormous beast. However, the arrow fell from his grasp and pierced his foot, and he died instantly.

In 'Saturn, Chiron and the Centaurs' (pg 224) Melanie mentions the possibility that the brief period when Pholus is within the realm of Saturn – and so subject to more constraints than when in the realms of the three transpersonals – may be times when the lid should stay on the jar. This idea fascinated me and I've been mulling it over since the seminar. There are two things to consider here. Not only is there the matter of what difference it might make to mundane events and people born when the jar should be kept sealed, but also how does it change Pholus' expression in the period that he ventures out past Neptune's orbit and moves through Pluto's realm?

To get an idea of how it might work in individual charts it's easiest to start with what was happening in the world when Pholus was at the extremes of his orbit, as that's the ground from which individuals emerge. And it's important to remember that Pholus isn't operating in a vacuum. In fact, Pholus seems to be linked in to the Uranus-Neptune cycle, as for the last couple of hundred years every other Pholus perihelion has occurred quite close to the Uranus-Neptune conjunction (understandable, as this cycle is around 171 years and Pholus' is about 92 years). There are also links with the Uranus-Pluto cycle, though these are more spasmodic.

Potentially there are six different phases in Pholus' cycle. The waxing phase starts at perihelion when the lid is kept on, then the main part (the lid comes off) and the period in the Underworld. Aphelion begins in the Underworld still, but with things now being brought back to the surface world.  This leads to another period of 'the lid comes off' when things spill out of the jar then, at the very end of the cycle, the jar is once again sealed. 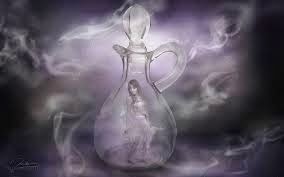 The sealed jar suggests a womb-like environment, where things can ferment or develop in the dark. It's like the period when the Moon is dark, which encompasses both the end of the old cycle and the beginning of the new. Using the analogy of the seed, it's released towards the end of the cycle and drops to earth. It beds itself down as one cycle ends and starts to germinate as the new cycle begins, which in this case is when Pholus is closest to the Sun. Or at least, it might – after all, not every seed develops. That's why the lid has to stay on – to provide a safe and nurturing environment from which new impulses can emerge. And what better place for things to begin to take form than in the realm of Saturn?

During the next phase – the lid comes off – we get the new shoots emerging and growing ever stronger. Pholus at this stage is like the genie who escapes from the bottle: once the cork's out, there's no telling what he'll get up to. It could be an inspirational and creative journey, or a disastrous one. Life's like that. There are no certainties, and uncertainty is very much part of Pholus' nature. 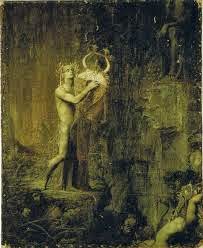 Pholus entering the Underworld is about encountering forces that are beyond our understanding, and beyond our control. They're cold and impersonal, like Pluto. You can't bargain with them, or do deals – this is not the realm of the mischievous but genial genie. What you encounter here are chthonic forces that are utterly indifferent to humans. And they can be terrifying. I think here of bumbling Uncle Andrew in C S Lewis' 'The Magician's Nephew,' who unwittingly lets loose the terrifying, titanic figure of Queen Jadis on Edwardian London – She who has spoken the Deplorable Word which destroyed her own world. We, of course, are Uncle Andrew.

Aphelion is the midpoint of the cycle, and from here we're bringing something back from the deepest part of the Underworld and letting it loose on the world. As Pholus once again crosses into Neptune's realm, the lid is off the jar again and who knows what will arise or where it'll lead us. Then, as the cycle draws to a close, the lid is shut again. This both closes the door on the old cycle and carries the seed of the new, which may well be something else that was brought back from the Underworld, but which hasn't yet  manifested.

I will pause there, and explain how this plays out in Pholus' recent cycles separately.
Posted by Unknown at 16:58