Eris is a dwarf planet which doesn't seem to have registered much in astrological consciousness yet, but I think that might change soon because we're approaching a major encounter between Eris and one of the outer planets. It feels like there's something of the Dance of the Seven Veils about Eris. Photographed on 21 October 2003, she wasn't identified as a possible planet until 5 January 2005. There was further delay in announcing her discovery, on 29 July 2005, and her name, on 13 September 2006. And of course, during this process she managed to get Pluto demoted from full planet status to dwarf, on 24 August 2006.

Even her naming was problematic. The team that discovered her gave her a working name of Xena, after a television character. They couldn't put that name forward because the organisation that decides these things wanted the new object to have a classical name. Mike Brown (leader of the team that discovered her) wanted to call her Persephone but there was already an asteroid with that name. He also toyed with the idea of naming her Lila, a name very similar to that of his recently born daughter. Given the chaos she caused along the way, my money's on the planet herself holding out for the name Eris, which belongs to the goddess of strife and discord.

Actually, 'strife and discord' is a rather simplistic way of looking at Eris. She goes much, much deeper than that. Deeper and darker than Pluto, I'll wager, especially now we know Pluto has a heart. Joking aside, now that Pluto's helmet of invisibility has been removed, will our relationship to him change?

In myth there are two Erises, with completely different genealogies. One is daughter of Zeus and Hera, and sister of Mars, and she seems to be the more warlike of the two. The other is much more interesting and possibly much more ancient. She's the daughter of Nyx and Erebus (Night and Darkness), or in some versions, of Nyx alone. Hesiod tells us that this Eris is 'kinder to men.' There might also be a connection between Venus and Eris, as light and dark sisters, though it doesn't figure in Greco-Roman mythology. We see it in the ancient Sumerian account of the descent of the Goddess Inanna to the Underworld to visit her sister Ereshkigal, Queen of the Underworld. Inanna is stripped bare and brought low during her descent, then killed when she reaches her sister's kingdom. Inanna's corpse is hung on a peg and left to rot ... though she is, of course, reborn and returns to the upper world. It's a story that comes down to us in folk songs like Cruel Sister, where the rivalry between dark and fair sister spills over into murder, with the fair sister eventually being vindicated.

The story most often associated with Eris is the one about the apple of discord. This shows how one small slight can spiral out of control, with devastating consequences. Eris wasn't invited to the wedding of Peleus and Thetis – after all, who wants the goddess of strife at their wedding? 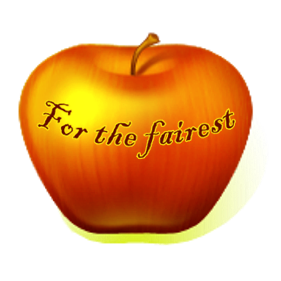 But Eris isn't easily thwarted. Unseen by the other guests, she rolled a beautiful golden apple bearing the words 'For the fairest' into the room where all the guests were partying. It landed at the feet of the goddesses Hera, Athene and Aphrodite and each of them coveted it. Zeus, immediately recognising the danger to himself in having to decide which goddess should be judged the fairest, delegated the task to Paris, a Trojan prince. The goddesses tried to bribe him, Hera by offering him kingdoms, Athene by offering him wisdom and skill in warfare and Aphrodite by offering him the most beautiful woman in the world. Paris chose Aphrodite's gift and awarded her the apple. The only problem was that Helen, the woman in question, was already married – to the king of Sparta. The Greeks subsequently formed an expedition to retrieve Helen from Troy, which developed into the Trojan War and ultimately the destruction of Troy.

There are echoes of this myth in later tales like Snow White, with the wicked stepmother's 'Mirror, mirror on the wall … who is the fairest of them all?' and her gift of the poisoned apple. And in Sleeping Beauty we have the thirteenth fairy who isn't invited to the christening because thirteen's an unlucky number; so she turns up uninvited and lays a curse on the young princess. So Eris is no stranger to us.

Finally, a few vital statistics for Eris. Her cycle is about 560 years and very elliptical, to the extent that she spends nearly half of it in just three signs – Pisces, Aries and Taurus. She's at her slowest in Aries, taking about 125 years to move through it – that's about one degree every five years. She first entered Aries in 1922 and remains there until 2044, so almost everyone alive today will have Eris in Aries. Her last perihelion was in 1699, when she was nearly 38 astronomical units (AU) from the Sun. That's 38 times further than we are, because an AU is our distance from the Sun – 93 million miles. She was at aphelion in 1978, 97.5 AU from the Sun. Pluto, by way of comparison, is just under 30 AU at perihelion and nearly 49 AU at aphelion. As well as having an elongated orbit, she's also steeply inclined to the ecliptic: most planets lie within 8o of the ecliptic, Pluto used to be the most eccentric with a 17o inclination but Eris is more extreme, at 45o. That means she isn't bound to the zodiac so, just to add to her formidable reputation, for almost all of her time in Aries she's actually among the stars of Cetus – the monster from the deep. Eris is an orbit-crosser, spending part of her orbit within that of Pluto. She has one known moon, Dysnomia (Lawlessness).


So what does Eris represent in a horoscope? I'll take a look at this in my next post.

Thank you. I found this most interesting. Best wishes to you and your group.