Henry Miller was a twentieth century American modernist writer who garnered a notorious reputation as a pornographer. Many of his books were banned from publication in the English speaking world until the 1960s. He was born in the late nineteenth century, under the Neptune-Pluto conjunction, and died in 1980. 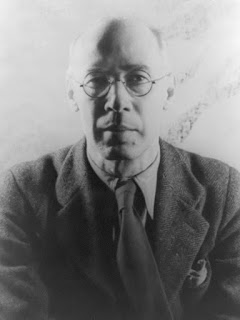 Miller is notable from an astrological point of view because he maintained a long-term interest in astrology. It is likely that he consulted astrologers, perhaps Sydney Omarr, and that he knew how to interpret a birth chart. He corresponded with Dane Rudhyar and was influenced by Rudhyar's Astrology of Personality. Rudhyar and Miller met in the early 1940s in New York. At the same time, Rudhyar met Anais Nin, Miller's lover from his days in Paris in the thirties. Miller also made frequent references to astrology in his works.

Miller's birth time is cited in Erica Jong's homage to Miller called The Devil at Large. She gives his birth details as 26 December 1891, 12:17PM, Manhattan, NY. The source of this data is likely to be another biographical work called Always Merry and Bright by Martin Jay. There is a copy of Miller's horoscope on the web at http://www.huffingtonpost.com/arthur-hoyle/the-astrological-henry-mi_b_5397661.html which also shows this time. Other times exist for Miller's birth, with other sources giving between 12:30PM and 12:45PM. The time given in the Solar Fire database is the midpoint of these two – 12:37PM.

Any of the times between 12:17PM and 12:45PM can be used to successfully establish Miller's temperament type. Miller himself confirmed that he had Aries rising, and any of the birth times mentioned above will give this Mars ruled sign on the ascendant. During the 1970s Miller corresponded with Erica Jong, another American writer. He said in a letter to her dated Saturday 15 June 1971 “No, I am not Aries, I am Capricorn (Dec. 26 1891) – really ancient, what! But Aries is my rising sign. I have been in love several times with Aries women – always disastrously.”

Henry Miller's horoscope, calculated for 12:17PM, is shown below. 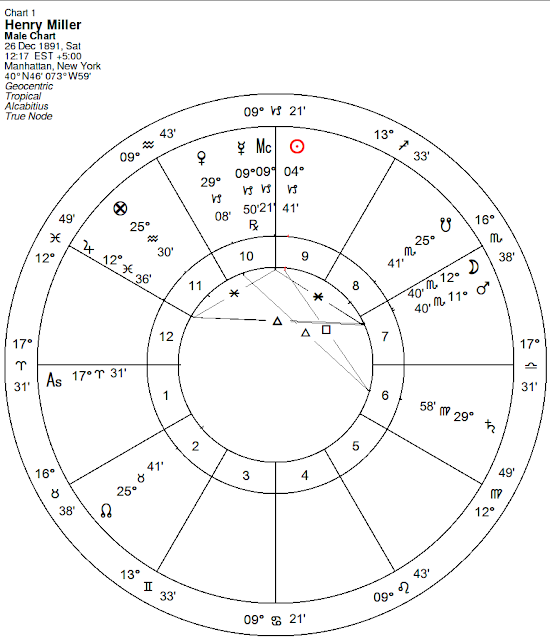 In another blog on Janis Joplin I have given a brief background to the temperament technique. The only variation I am adding in to the calculation below is to identify the temperament associated with the solar quadrant – for example, if an individual is born between sunrise and midday, the temperamental association for this quarter is sanguine. Miller was born just after noon, hence his temperament by solar quadrant is choleric.

Henry Miller is strongly phlegmatic. In some ways, this is a great surprise, given his reputation for being a wonderful raconteur and welcoming host. However, although Henry became well-known in later life, his reputation was essentially an underground one and he did not move in high level academic and literary circles. He lived in relatively obscurity at Big Sur in California for most of the 1940s and 1950s. It was only when the world caught up with him, and the censorship of his books ended in the 1960s, that he became something of a celebrity.

Miller wrote from a feeling point of view. His novels are fluid, free-form and driven by emotion. He is not a scholarly writer or novelist. He did not give his works a highly structured (melancholic) quality. Although Henry was a highly intelligent man, he had little time for academics and critics. He felt that most of them did not understand what he was trying to achieve. It was his reputation with other writers and artists that made his name, rather than formal critical acceptance.

Miller has a relatively strong streak of choler in his makeup. This is created by Mars being strong as the ruler of Aries, his rising sign, and the almuten of the Moon. Choleric qualities are also added by his afternoon birth. Note that Miller's Mars placement in Scorpio reflects the overall temperament balance in his chart, Mars being a choleric factor placed in a phlegmatic sign. Miller has the Moon, a phlegmatic factor, close by his Mars. Aries rising, Mars and Moon in Scorpio, all reinforce the phlegmatic-choleric quality of his horoscope.

The challenge with a phlegmatic-choleric temperament balance is the lack of a common quality that bridges the two modes of expression. The phlegmatic style is cold and wet; the choleric style is hot and dry. The risk is that the cold, wet phlegm drowns the hot, dry choler and extinguishes the individual's fire and drive. Nevertheless, Miller's mode of self-expression is a good example of two temperament types working together. Miller seemed to be able to balance a need for privacy and reflection with a drive to achieve a significant artistic reputation and engagement with the wider world.

Without his choleric streak, Miller probably would have been a recluse. In various interviews that are available on youtube, Miller reflects on the isolation of the writer's life, living in a world of ideas (or, in his case, feelings). The hot, dry nature of choler warms and stimulates Henry's predominantly cold, wet, phlegmatic nature. It is likely that strong phlegmatic qualities gave him a very sensitive, private side that he hid behind his choleric Martian machismo image.

Miller has very few elements in his natal chart that directly add melancholic or sanguine qualities to his temperamental makeup. Miller was little interested in the mundane world of work, a melancholic realm, and we have to look elsewhere in his chart for sanguine qualities, principally to his strong Jupiter, placed in one of its own signs – Pisces. Nevertheless, Henry had a Capricorn Sun; his MC, Mercury and Venus are all in that sign. He also had a strong Saturn, placed in Virgo, an earth sign, which are both melancholic factors.

Even though Miller found it difficult to hold down a conventional job, he had a very tenacious and hard-working streak. He worked hard to become a writer and then experienced great hardship as a result of his vocational choice. It is interesting that these factors do not reflect in his underlying temperament but are other qualities that Henry was able to work with astrologically. This shows that the temperament is about a fundamental mode of self-expression or an underlying orientation to the world. Other astrological factors can play a role in an individual's life but are modulated in light of temperament characteristics.

It is worth spending half an hour watching the interview with Henry Miller called Henry Miller: Asleep and Awake. This film is also known as the Bathroom Monologue. The bathroom is a phlegmatic (watery) environment. During the half hour, Miller reflects on the various images that he has posted on his bathroom walls. You can see him responding to the memories and experiences associated with the images. He seems to be in a very phlegmatic mood. Reflection, memory, and images all have phlegmatic associations. Nevertheless Miller is clearly 'holding court' in a choleric (opinionated) fashion. (Some of the images contain 'adult content' – please be warned.)

In the final five minutes of the documentary Henry is transferred from Pacific Palisades to New York, still wearing his bathrobe, where he reflects, in an unsentimental way, about his roots in Brooklyn. This section of the film highlights the direct, Martian, choleric side of his temperament in an obvious fashion. There is, however, an overall nostalgic tone to the ending of the film, which reinforces Miller's phlegmatic nature.