Janis Joplin became a charismatic, emotional, fiesty entertainer during her short life. She was famous during the heyday of the San Francisco flower power movement in the late 1960's. She sang with Big Brother and the Holding Company; in the latter part of her career formed her own backing bands, the Kosmic Blues Band and the Full Tilt Boogie Band. Janis Joplin was a pioneer female entertainer, fronting male bands and becoming a band leader. This pioneering spirit has marked her as a highly influential woman in popular culture. 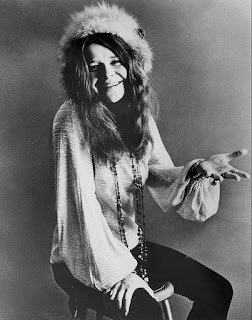 Dorian Gieseler Greenbaum has written an excellent book on temperament. She gives the following keywords for each of the temperament types. I have added my own words to give additional details about the pure temperaments.


For temperament analysis I have developed a weighted scoring system using the following factors. Temperament analysis is typically made using a combination of the temperaments associated with the Moon placement and the ascendant. The only solar factor that is analysed is the birth season – the Sun's placement according to the equinoxes and solstices.


These factors are derived partly for Greenbaum's simplified temperament calculation, but also draw factors from other systems for analysing temperament. Greenbaum's approach is helpful for identifying the temperament type quickly. However, I feel that it is useful to add further detail to the process to get a more subtle understanding of temperament. 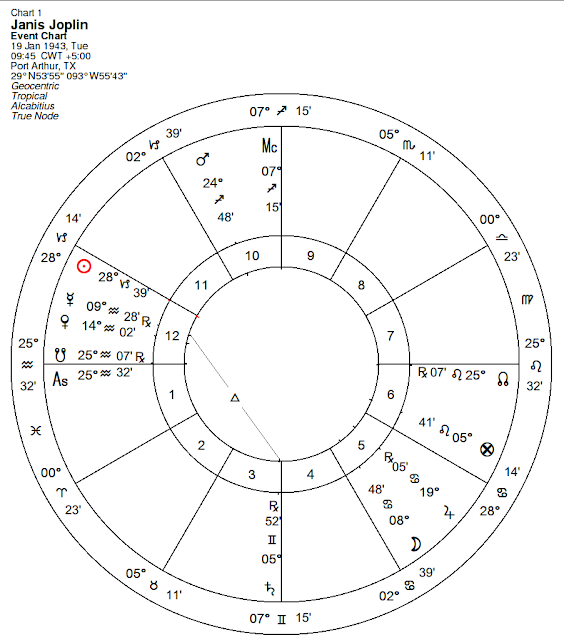 
Using this scheme, which is developed from Greenbaum's temperament analysis methodology in her book Temperament: Astrology's Forgotten Key, Janis Joplin had a mixed phlegmatic/sanguine temperament. She also had a strong choleric element in her makeup. You can follow the breakdown of the scoring in the table below.


By season, Joplin is a phlegmatic type being born in the winter in zodiacal terms. Joplin also has the Moon and Jupiter in Cancer in the fifth house. This means that the phlegmatic temperament scores heavily through these placements, the Moon being the ruler of Cancer and the almuten of the Moon itself. The Moon's wide conjunction with Jupiter, which is itself exalted in Cancer, lends further phlegmatic emphasis.

Phlegmatic qualities are often associated with subtlety, emotion, being private or retiring. Her phlegmatic qualities are somewhat moderated by the presence of Jupiter, a sanguine planet, in Cancer. However, although Joplin had a large phlegmatic component in her horoscope, she also had an almost equal measure of the sanguine temperament. This came from her rising sign - Aquarius - and the fact that she was born in the morning, the sanguine phase of the day. Furthermore, Saturn, her ascendant ruler is in Gemini, another sanguine sign.


There is a very natural relationship between the phlegmatic and sanguine temperamental components. They share the common quality of moisture or wetness. The heat of the sanguine temperament offsets the cold and retiring coldness of the phlegmatic component. Further heat is provided by the choleric components in her horoscope - the elevated Mars in Sagittarius - and the moon phase, Joplin being born in a waxing phase between the first quarter and full moon.

The sanguine and choleric qualities lent warmth and drive to her personality. Joplin used the choleric drive of Mars in Sagittarius to achieve her musical and professional goals. She used the sanguine elements of her personality to lend exuberance and charisma to her presence. Nevertheless the emotional side of her life was never far from the surface and fuelled her performance as an entertainer.

Joplin has very little of the melancholic temperament in her natal chart. The sole melancholic dimension that is brought out by the analysis methodology is Saturn, the almuten of the ascendant. Saturn, a melancholic planet, is the point that delivers the most dignity to the degree of Joplin's ascendant; it is the thus the almuten of the ascendant degree. This lack of melancholy means that Joplin may have found it very difficult to deal with the everyday, and, in particular, the business element of the rock music industry.

Her lack of melancholy might have been offset, to some extent, by her Capricorn Sun. However, the temperament balance suggests a warm, exuberant personality who was able to experience and explore deep emotional elements in her personality.

During the height of her fame, Janis was invited to attend a high school reunion in her home town of Port Arthur, TX. You can find this interview on Youtube. In this brief conversation, you can see the temperament balance in Joplin's horoscope working itself out as she moves between deep emotion (phlegmatic), feisty challenges to the questioners (choleric) and youthful excitement (sanguine). You can see the melancholic temperament in action as she reflects for a moment on some of her answers. However, the other temperaments are clearly predominant.