The nineteen month cycle of Venus involves a very elegant dance between four partners: Venus, Sun, Earth and Moon. At inferior conjunction, Venus is between the Sun and the Earth, and at her closest point to Earth. At superior conjunction, Venus is on the other side of the Sun, at her remotest point from Earth. Thus at the former, she is mediating the energy of the Sun to the Earth, and at the latter, she is mediating between the Sun and the rest of the Universe.

So where does the Moon fit in? Well, Adam Gainsburg – who devised his thirteen-phase Venus cycle in The Light of Venus by actually going out and looking at the sky – points out that in the eight months when Venus is Morning Star she makes a monthly conjunction with the Moon. But the interesting thing is that the conjunction is always with a balsamic Moon. It's so obvious when someone points it out to you. After all, in the early morning you can only have a thin crescent of a Moon, as she's making her way back to the Sun. I'm not an early morning person myself, and have rarely if ever seen a morning conjunction of Moon and Venus. I have, however, seen plenty of conjunctions of the crescent Moon and Evening Star Venus but I suppose I just thought myself lucky. I didn't realise that, in the evening, Venus can only be conjunct a new crescent Moon for exactly the same reason: the Moon has just met the Sun and is setting out on her next monthly journey.

I've been playing around with this and I'm pretty sure that, during the Morning Star period, the Moon-Venus conjunctions begin at their furthest apart (45o) and the angle decreases as Venus moves further from Earth and becomes lower and dimmer in the sky. When she disappears from the morning sky, the next Moon-Venus conjunction is at or very close to a New Moon. The exact opposite occurs when she re-emerges after her lengthy period of invisibility around the superior conjunction. There's a Moon-Venus conjunction around a New Moon just before she reappears, and then the angle between them increases over the next few months until it reaches 45o again, shortly before she disappears from the evening sky.

This brought to mind an image of a cup or a goblet, and set me thinking about what this cycle's about. There are many similarities between the Descent of Inanna to the Underworld and the journey of Venus, but personally, I don't fancy my corpse hanging on Ereshkigal's peg for an indeterminate period, even if it does lead to transformation. It smacks too much of the angst-ridden, renunciative guilt-trip that we've been led to believe is all there is. But life is much more rounded than that.

And then inspiration struck. There's an obscure poem from the Matter of Britain called The Spoils of Annwn. No-one's quite sure how old it is, or indeed what it means. I like to think that it carries several layers of meaning and so can be appreciated by many different people in the same audience, all at the same time. Thankfully it was crafted in an age where you didn't have journalists and interviewers hammering away until they had wrung the Ultimate and Undisputed Truth from its author. This is simply a different way of thinking – it's like holding up a diamond and watching it shift and change as the light catches it. It's like any good myth – it can be enjoyed by many as a cracking good yarn, but it also carries pearls of wisdom that only a few will understand.

But back to The Spoils of Annwn. It tells of a raid on the Underworld (Annwn) by King Arthur and three shiploads of men. The raid seems to have had various purposes, such as rescuing a prisoner, stealing the Cauldron of Inspiration or maybe they were just generally behaving like hooligans and coming away with a bag marked 'Swag'. They met with mixed success, as each verse ends with the dolorous line 'Except seven, none rose up from …' (whichever one of the seven Fortresses they had to pass). These seven Fortresses are much like the seven Gates of the Underworld that Inanna had to go through. They could refer to the seven traditional planets, the days of the week or it could just be because seven was a magical number. The overall impression is that it was a risky business, but the prize was worth it. (Why do I think of oil and Iraq here?). Anyway, you can imagine it going down a storm with the feudal lords and their merry men. This superficial layer, however, doesn't have much bearing on the cycle of Venus.

My cup or goblet had by this stage turned into a cauldron, and as I turned it over in my mind I realised I could map out the whole Venus journey on the Cauldron of Annwn. One of the 'hidden' meanings of the poem could be the quest for poetic inspiration, as Taliesin – the Welsh bard – was one of the seven that returned with Arthur. The relevant lines are:

My original song stems from the cauldron,
By the breath of nine maidens was it kindled.
The Chief of Annwn's (i.e. Lord of the Underworld's) cauldron, what is its power?
Ridged with enamel, rimmed with pearl,
It will not boil the coward's portion …

Just briefly, the Nine Maidens are the Daughters of Memory, or the Moon – effectively the Nine Muses. There are simply too many mythical cauldrons to explain all their meanings, but Taliesin gained his poetic insight by stealing from another cauldron three drops of inspiration that were meant for someone else (he was only meant to stir the brew); and there are several magical cauldrons that will not boil meat for a coward. I take that to mean, in this context, that you can't be certain of success – much as, in the lunation cycle, you can't guarantee that the New Moon seed will flower and fruit.

While we're back with the Moon, I should mention that when Venus is Morning Star she's young and fresh and the Moon is old. Thus the Moon acts as guide and mentor to Venus as she descends to the Underworld. However, as morning Venus is somewhat adolescent in nature, she might not always take to that too kindly. But Evening Star Venus has matured. Joining with a Moon which is carrying the seed of its recent conjunction with the Sun, Venus can use the new impulse of the solar-lunar cycle to assist her in fulfilling her own purpose. And, returning to Arthur's raid on the Underworld for a moment, he travelled there by ship – not so common in classical mythology, but quite usual in Celtic legends.

But before we embark on a voyage around a cauldron, what exactly is the journey about? I think it's about getting in touch with your creativity in whatever way is meaningful to you and then applying it for the greater good. Sometimes it'll happen, sometimes it won't. We have little control over the process or its outcome – however much we like to kid ourselves. 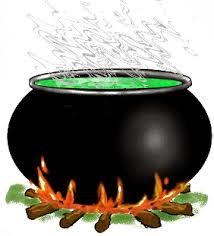 So we start at the rim of the cauldron, which is edged with pearls. The light catches one of them – this is Venus' heliacal rising, her first brief flash as she appears on the horizon after the inferior conjunction a few days earlier (Birth phase). Over the next two weeks, she establishes herself as Morning Star (Emergence phase). She is still retrograde at this point. Now at the point where the cauldron bulges out, we reach the phase called Fullness. It starts with Venus' station and turning direct and ends with her at her maximum distance from the sun, hence she's at her brightest and highest in the sky. This phase lasts about seven weeks. From this point on, Venus is moving away from Earth and closer to the Sun. Over the next five and a half months (Surrender and Discovery Phase), Venus gradually decreases in brightness and height. Remember too that since Emergence Venus has joined with the old Moon each month in the morning sky. At the end of this period, she disappears from the morning sky and begins her Underworld journey.

We have now reached the flames and bits of wood on the cauldron, which cover the phases Immersion, when Venus begins her period of invisibility and is moving at her fastest direct speed, and Transmutation, when she reaches the superior conjunction with the Sun. This is where an alchemical process takes place – the cauldron is set deep within the earth and is warmed by flames. The water within it is concocting … something … and the breath of the nine maidens is both fanning the flames and cooling the mixture. These two periods last about three and a half months and after the conjunction Venus' thoughts once again return to home.

At the end of this period of invisibility, Venus is reborn as Evening Star (Rebirth phase – about a week). She then begins the long, five and a half month ascent (Remembering and Embodiment phase), during which she becomes increasingly brighter and higher in the evening sky. She is now moving towards Earth and away from the Sun. And, of course, she is accompanied by a new crescent Moon each month (up until the Transition phase). She reaches her maximum brightness and greatest height at the Wholeness phase (about seven weeks and the full bulge on the cauldron), after which both start to decrease until she reaches her station at the Completion phase (about two weeks) and turns retrograde.

The next three stages are collectively called Transmigration as you're now moving on to something else. I see these collectively as the mouth of the cauldron and the steam above it, where what's been fermenting since the superior conjunction can be reaped. In all, the period is very short – barely two weeks – so you have to be quick! The period begins with the retrograde Venus' disappearance from the evening sky at the Transition phase (again, visualise one of the pearls on the cauldron's rim quietly flashing and then disappearing). This is like the final stage of the lunation cycle, when the seed – which holds the essence of the old cycle and the promise of the new – is released. This is followed six days later by the inferior conjunction (Inception phase), which might yield the quintessence, the distillation of the cauldron's brew, like the three drops of inspiration that young Gwion imbibed, transforming him into Taliesin. Venus is now at her closest point to Earth once again. The final few days are the Gestation phase, when you prepare yourself for your return to the world, just like Venus at her heliacal rising.

Well, it all makes perfect sense to me, so I hope it does to you also. If you want to find out more about this subject, I really can recommend Adam Gainsburg's book – he maps Venus' journey differently and he gives a lot more information about each phase. You can also find out which phase you were born under.
Posted by Unknown at 17:37