I don't know enough about the history or culture of Ukraine to do an in-depth analysis of it, but it strikes me that the shape of its Independence chart says a lot about where it finds itself today. 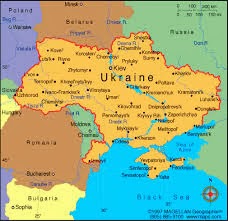 If you take a look at it on an atlas, Ukraine is a large landmass that's almost completely split into east and west by the Dnieper river. To the north and east is Russia, to the west is Europe and to the south is the Black Sea.

Compare this to the chart – imagine superimposing it onto the atlas. You have two sets of planets gathered around the Ascendant-Descendant axis, almost a mirror image of each other. At the top of the chart is Pluto and some way below it Mars. I see this pair as the greater landmass of Russia to the north and east, which is not at all happy about the developments over the weekend and is making aggressive noises, raising the spectre of tanks rolling into Czechoslovakia in 1968. Interestingly, that happened under a Uranus-Pluto conjunction and what's happening in Ukraine right now is happening under the Uranus-Pluto squares. And to the south, where geographically you have only sea, there are no planets.

(Ukraine Independence chart is based on that in The World Book of Horoscopes by Nicholas Campion, but amended to EET zone as shown in Solar Fire Gold).

If you look at the planets on either side of the divide, again you find interesting pairings or opposites. On one side you have Sun, Venus, Mercury, Jupiter and the South Node; on the other you have Moon, Neptune, Uranus, Saturn and the North Node. (I've listed them according to how they link up to each other).

The group led by the Sun speaks to me of the past glories of Empire (the Soviet Union – Sun, Jupiter and South Node) and Putin's desire (Venus) to set up a free trade (Mercury) area called the Eurasian Union – the Russian equivalent of the European Union. BBC Correspondent Mark Mardell (http://www.bbc.co.uk/news/world-us-canada-26299178) says that Putin desperately wants Ukraine to be part of this project, because otherwise all he has is Moscow and a bunch of Central Asian dictators. He's already lost virtually all the other former Soviet vassal-states to the European Union, and were Ukraine to join them it would be a further erosion of Russia's power.

On the other side you have the People (the Moon) calling for change (Uranus) and seeing their future (North Node) as lying with the West and the European Union. Saturn lurks just below the Ascendant, suggesting that the old order could still rise up and crush the changes. But perhaps more powerful is the Uranus-Neptune conjunction which has already risen. I think this conjunction is key to what's happening here. Most of the people occupying the central square in Kiev were born after the collapse of the Soviet Union. They have no memory of life under Soviet rule, whereas most of the people in power were brought up under the old system. They also have little time for politicians, including those of the opposition. They have their own vision for the future – as might be expected for those born around the Uranus-Neptune conjunction. They don't want colourful politicians with big personalities and lots of empty promises. They've seen what's happened since the Orange Revolution a decade earlier – corruption, bickering and rivalry between those in power. Significantly, the word being used for the kind of government they want is 'technocratic' – now what is that if it isn't Uranus-Neptune in action! And though it hasn't really been mentioned much, I imagine internet, social media and mobile phones have all played a big part in mobilising and motivating people – another manifestation of Uranus-Neptune.

It could all go horribly wrong. Tanks could roll into Kiev, or the revolution could fall flat or fizzle out as it did in the Sixties, when most of the nice middle class revolutionaries who'd manned barricades in Paris or staged student demos and sit-ins in London exchanged the long hair and beads for suits and ties, and the vision of a utopian socialist future for free market capitalism. It could descend into thuggery, criminality and lawlessness (transiting Pluto is hovering between the Ukrainian Uranus and Neptune at the moment). I also fear that if or when Ukraine is admitted to the European Union they'll be horribly disillusioned (Neptune again) by what they find, realising all too late that the grass wasn't that much greener on the other side after all. We must also acknowledge that the Arab Spring hasn't turned out to be an outstanding success. But this is the Uranus-Neptune generation standing up and showing their mettle. There's no guarantee that this will be any more successful than previous uprisings have been, but at some point one of these struggles for change will break the mould and point to a new way of doing things.

thoughtful summary. Liked that the encompassed the Neptune/Uranus generation and gave an overview of various revolutions. Appreciate you writing.