These definitions do advance our understanding because we now know that the midheaven or MC is the point where the ecliptic meets the meridian. The meridian is the great circle through the running north and south points of the observer's horizon, and through the zenith, the point exactly overhead on the celestial sphere, and the nadir, the point on the celestial sphere opposite the zenith.

The following diagram illustrates the points made in the previous paragraph. Note that the midheaven is shown crossing the ecliptic above the horizon and due south. This is a fair representation of the midheaven for a northern hemisphere observer at mid-latitudes. The diagram is for illustrative purposes and the situation will vary for observers at other latitudes. 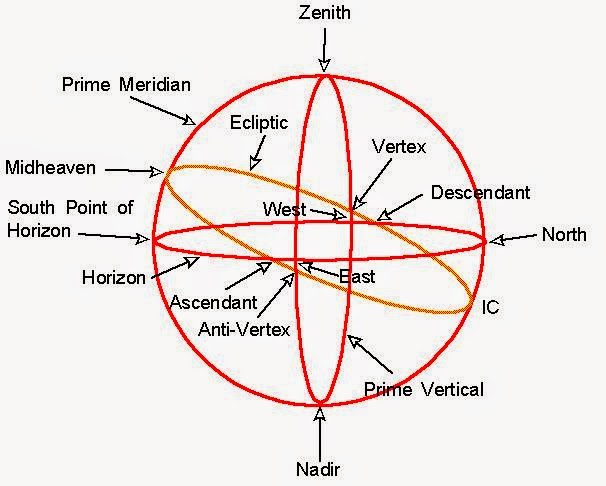 But how do we decide between the definitions of the midheaven that Hand has offered? By direction? Or by altitude above the horizon? This is critical because in polar regions and at the equator both definitions become ambiguous for different reasons.

So our definition by direction and hemisphere has already broken down. To correct this problem, we have had to qualify the directional definition further, by reference to the latitude of the observer. What seemed to be a straightforward description of the midheaven has now become complex and unwieldy.

What about the definition with relation to the horizon. In this definition the midheaven is always above the horizon, irrespective of its direction. This, on the face of it, seems quite reasonable. After all, it is true for anybody living in the tropics and temperate regions. However, when we get to the polar regions (beyond on the arctic or antarctic circles), we find that the midheaven so defined may again be to the north for northern observers. Others also claim that the MC is always to the south in polar regions even when it is below the horizon.

I think there are good reasons why we should be critical of both definitions of the midheaven - by direction (south/north) and by position relative to the horizon (above/below). Neither seems to have offered an unambiguous definition of the concept we are examining.

Now when the northern winter solstice (00 Capricorn 00 in the tropical zodiac), the point on the ecliptic with the most southerly declination, is due south of the observer in polar regions it will be below the horizon. At this time, the Sun at the northern summer solstice will be due north of a northern polar observer but above the horizon.

What should we make of this? The summer solstice Sun seems to be on the MC again. It is crossing the meridian and clearly above the horizon. The other point of the ecliptic crossing the meridian, the northern winter solstice, is still below the horizon in the north. So the sun seems to have been on the MC twice in one day if we use the above/below definition of the midheaven in polar regions.

It's my view that it is the second instance of the Sun crossing the meridian that we want to call Sun-MC. This is because it is both on the meridian and at its highest point in the sky in a single diurnal cycle. In short the Sun is at its closest approach to the zenith, the point immediately above the observer. Of course, in polar regions it won't actually be immediately above the observer, but it has attained its minimum zenith distance. It is this observation that finally provides us with an unambiguous definition of the midheaven or MC.

The midheaven or MC is the degree of the ecliptic which, at the time and place of casting the horoscope, has its minimum zenith distance (MZD) measured on the meridian; that is, it is the point at which that particular degree makes its closest approach to the zenith in any single diurnal (24 hour) cycle. This definition does not mess up in the tropics, where directional definitions become unclear, and it means that being above or below the horizon is not relevant, which has been shown to be a problem in polar regions.

What about the tropical northern winter solstice? This point never comes above the horizon in northern polar regions. It will still be on the MC according to this definition because when it is due south of a northern observer the particular degree associated with the northern winter solstice – 00 Capricorn 00 in the tropical zodiac - will have reached its minimum zenith distance (MZD) in that diurnal cycle. That is, at that particular time and place, it will be at its closest approach to the zenith despite being below the horizon.

This may seem quite counter-intuitive at first. After all the Sun will still be higher in relation to the horizon in the north than the winter solstice degree below the horizon in the south. But the critical point is that the Sun at this time is not at the closest point to the zenith that it can be during the course of the day. This point will come when it attains its MZD on the meridian twelve hours later.

And consider the midwinter Sun at these latitudes - say, just above the arctic circle. It will rise to a point just below the southern horizon at  noon when it attains its MZD. Although the Sun in midwinter will be below the horizon, a glimmer of noon-day light will come over the horizon. Is this not what we would want for a Sun-MC conjunction, even one below the horizon. It's as light as it is going to get for a midwinter Sun on or just above the arctic circle. Twelve hours later, with the Sun on the IC defined by MZD, it will be midnight and deep dark.

The following diagram illustrates these points. The summer solstice Sun (identified by CN for Cancer) is shown just above the northern horizon (the midnight sun). In the course of 12 hours it will move along the dashed orange line to the point on the meridian due south of the observer. It is moved there by the rotation of the earth on its pole (marked NCP-SCP). The purple line from the zenith to the highpoint of the Sun shows the MZD (minimum zenith distance) at noon - the Sun-MC. Note that the Sun in the course of those 12 hours has moved to a position much higher in the sky than the midnight Sun - the Sun-IC.

The winter solstice Sun (identified by CP for Capricorn) is shown deep below the northern horizon at midnight. In the course of 12 hours it will move along its dashed orange line to the point on the meridian due south of the observer, just below the horizon. However, note that it has still moved towards the zenith, the point at the top of the sphere. The MC defined by MZD is marked. The difference in zenith distances at both points is shown by the light blue line. 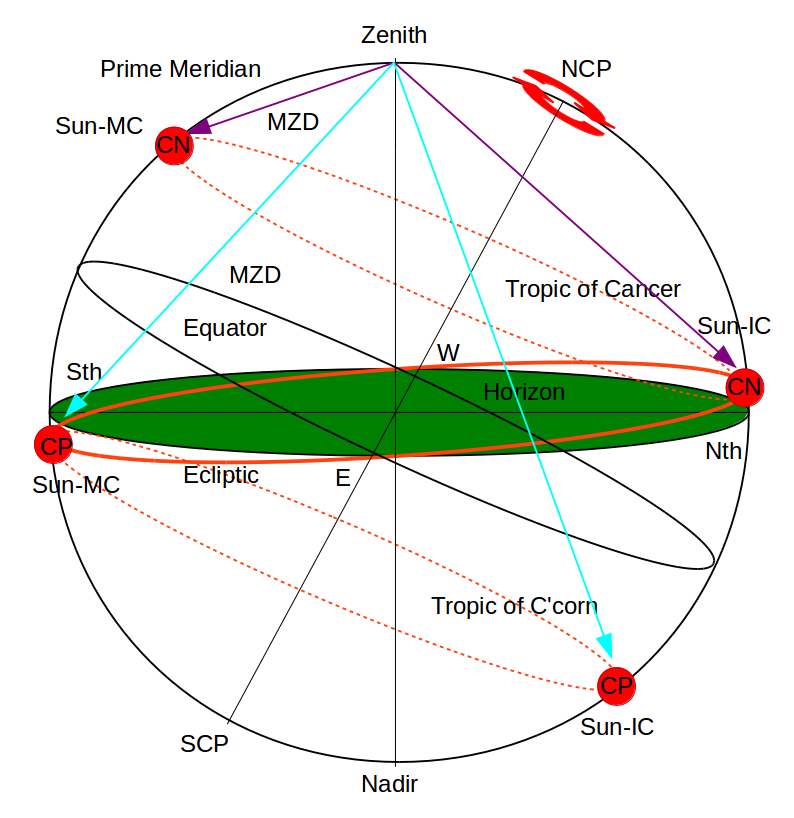 At any particular time in the day there may be points on the ecliptic that have less zenith distance (i.e. are closer to the zenith) than the point on the MC. An example is the nonagesimal point, the degree on the ecliptic with the maximum altitude above the horizon at a particular time and place. In general the nonagesimal degree won't be the MC at the time for which the horoscope is cast because it will have had its minimum zenith distance (it's closest approach to the zenith) at some other time during the diurnal cycle.

In fact, the nonagesimal can be precisely defined as the degree on the ecliptic with the minimum zenith distance measured on any great circle running through the zenith and nadir at a particular time and place.

It is worth noting that exactly at the poles all definitions of the MC become problematic, partly because all directions from the north pole lead south (towards the southern pole) and vice versa in the southern hemisphere. This makes the definition of the meridian itself difficult. However, this is not really a serious issue because as soon as one moves away from the pole, the definition of the meridian becomes possible once again.

So: the MC cannot be defined by direction (fails at the tropics) nor by its being above the horizon (problematic in the polar circles - the 'double midheaven' issue). The definition is unambiguously made using the concept of minimum zenith distance. The midheaven or MC is the point of intersection between the ecliptic and the meridian where that particular degree attains its minimum zenith distance during its diurnal cycle, irrespective of its direction in relation to an observer or its height in relation to the horizon.

Perhaps we should rename the MC the MMZD - minimum meridional zenith distance!

It is reprinted in the AA's compendium of early classic articles from the Journal - An Astrological Anthology: Vol. 1 (1959-1970). Selected and arranged by Zach Matthews.

In this piece, Blunsdon points out that the midheaven is the same at all latitudes, and changing the midheaven to conform to a definition (always above the horizon) transgresses this principle.

Blunsdon writes: "Let us first consider the MC and its derivation. As this is formed by the Meridian for the subject's birthtime, it is both personal and constant. We use the Local Sidereal Time and usually find the corresponding MC in our house tables: this is the same for all latitudes."