Astrologers will often define the ascendant as the point of the ecliptic on the eastern horizon at the time and place of birth. This is a reasonably good definition and is found in reliable textbooks. For example, in The Revised Waite's Compendium of Natal Astrology, the ascendant is defined as the point of the ecliptic which cuts the eastern horizon (Candlish, p. 20). In this textbook it is noted that the ascendant varies according to the time and place (i.e., latitude) of birth.

Hand introduces an important refinement in both definitions. He makes it clear that the horizon used by astrologers when identifying the ascendant is the rational horizon rather than the visible or apparent horizon. The visible horizon is the horizon available to the observer at the time and place for which the chart is cast. This is a small circle engirding the place lying parallel to the rational horizon. (Mayo, p. 15-16) The rational horizon is a great circle defined by points at a distance of ninety degrees from the zenith, the point immediately above the observer on the celestial sphere. (Mitton, p. 191) 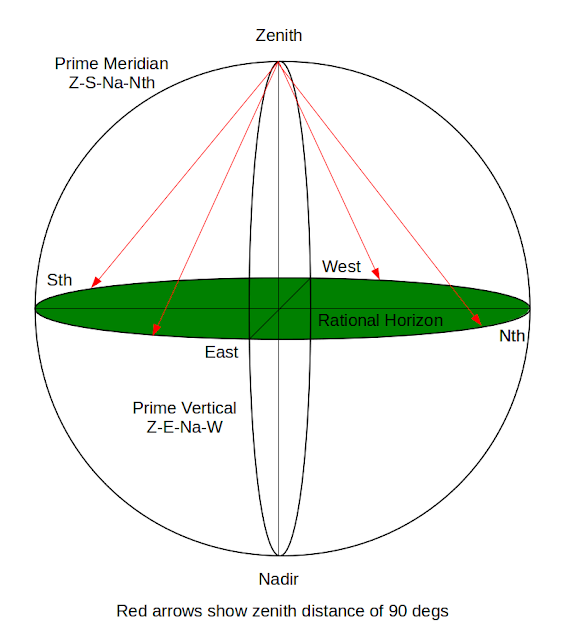 In a previous blog entry I used the concept of zenith distance to define the midheaven. The midheaven or MC is the degree of the ecliptic that has attained its minimum zenith distance during a diurnal cycle, irrespective of its direction in relation to an observer or its height in relation to the horizon. (http://www.exeterastrologygroup.org.uk/2015/01/the-definition-of-midheaven_18.html) In this second article, I would like to explore the possibility of defining the ascendant in astrology using the same terms and conditions as that adduced for the midheaven.

The descendant is the point opposite the ascendant, exactly fulfilling the condition of having a zenith distance of ninety degrees (again coincident with a point on the horizon) but having attained its MZD earlier in the day, i.e., it is now setting.

In this definition of the ascendant, the application of direction (east) or concepts of above and below are not required to make a precise meaning of the term. In fact, the ascendant so defined will always be in the eastern half of the rational horizon and the descendant will always be in the western half of the same plane. However, the application of direction is neither a necessary nor sufficient condition for the definition of the concept. Likewise, the recourse to above and below is not required and can be dispensed with, as we did for the definition of the midheaven.

In the following image, the definition of the ascendant offered above is illustrated. Note that the coincidence of the plane of the ecliptic and the plane of the rational horizon occurs at zenith distance of ninety degrees. The rising degree will move from its position on the horizon to the MC during the course of one diurnal cycle and set later at a zenith distance of ninety degrees. 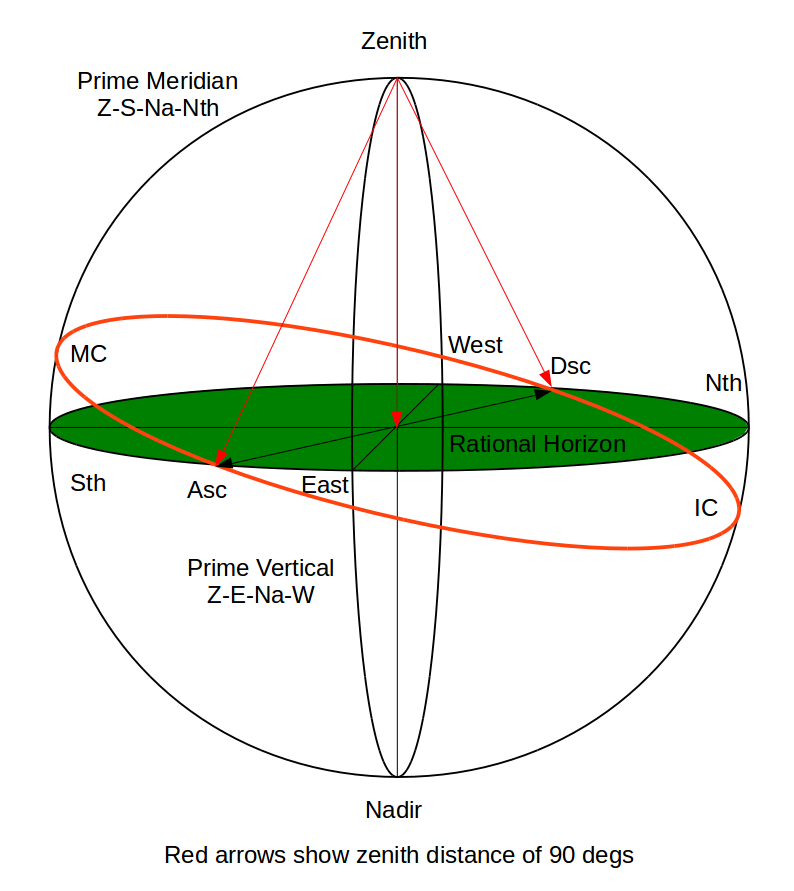 We now have precise definitions for the angles of the horoscope using the minimum number of concepts. In fact, in both cases, the concept of zenith distance is the only term that needs to be formally employed. Both definitions work at all latitudes and for any time during a diurnal cycle. That is, they are universally applicable, unlike, in particular, alternative definitions of the midheaven that have been offered using the concepts of direction and above/below.

The midheaven is defined as the ecliptic degree that is at its minimum zenith distance during its diurnal cycle. This degree will always be coincident with the meridian of the place but the zenith distance of any particular degree on the MC will vary with the latitude of the place. When a degree is on the midheaven it is at its closest approach to the zenith during its diurnal cycle. The degree may, in some circumstances in the polar circles, be below the horizon.

The IC (Imum Coeli) is the ecliptic degree that is at is maximum zenith distance during its diurnal cycle. This degree will always be coincident with the meridian of the place but the zenith distance of any particular degree on the IC will vary with the latitude of the place. When a degree is on the IC it is at its furthest distance from the zenith during its diurnal cycle. The degree may, in some circumstances in the polar circles, be above the horizon.

The nonagesimal degree is the point on the ecliptic that is closest to the zenith at the time and place for which the chart is cast - that is, it is the point on the ecliptic that has the minimum zenith distance measured on any great circle running through the zenith and nadir at this time and place.This point is different from the MC; the degree associated with the nonagesimal will have been, or will be, closer to the zenith when it had, or has, its MZD on the meridian. The MC and the nonagesimal will only coincide when the first degree of Aries or the first degree of Libra rises, that is, when the equinoctial axis has a zenith distance of exactly ninety degrees.

In a later blog, I will explore some of the implications of these definitions, particularly for house systems generally employed by astrologers.