Exeter's 'birth chart' is reckoned to be the Date of Incorporation: 23 August 1537 at 00:00 hrs local mean time. This gives the degree of 10 Cancer 59 rising, with 9 Pisces 00 on the midheaven. The following chart is set for the Date of Incorporation with Porphyry cusps for the intermediate houses.
The Sun at 8 VIR 51 and Saturn at 9 VIR 45 straddle the I.C. They form the apex of a yod shape with Neptune-Moon at 8-9 Aries and Pluto at 7 Aquarius. They are also part of a grand sextile with Venus and Uranus if one includes the nodes at 6 GEM/SAG 56. 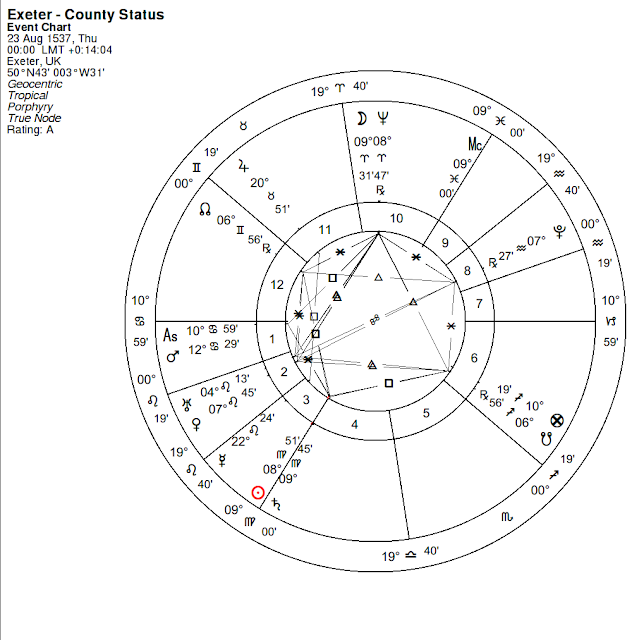 The fire that devastated the Royal Clarence Hotel on Friday 28 October 2016 occurred 8 weeks and a day after a Solar Eclipse hit the Sun-Saturn-I.C. conjunction in Exeter’s horoscope. A more immediate trigger was perhaps the New Moon two days afterwards, though prefigured by the actual event.
The relevant annular eclipse (not visible in the UK) occurred on 1 Sep at 9 VIR 21. 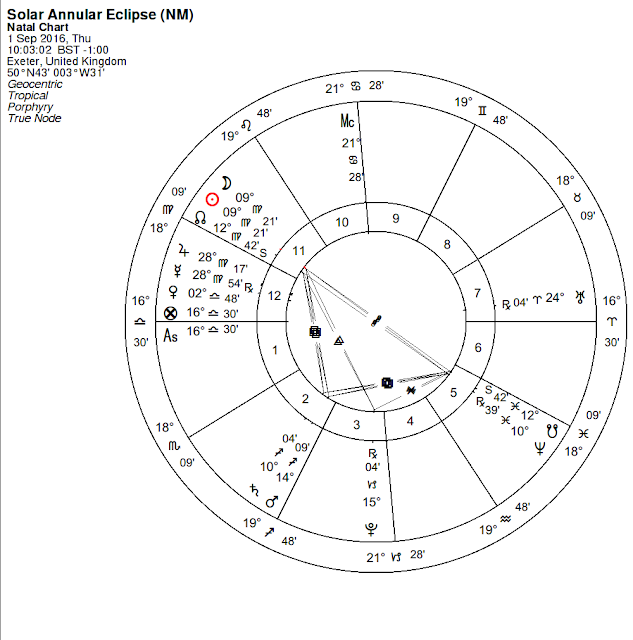 
The following bi-wheel chart shows the Incorporation chart in the centre with the eclipse chart in the outer wheel. The alignment of the eclipse degree with the MC-IC axis is clear. The fact that the eclipse occurred on the subterranean degree shows the fire attacking the heart of the city, the very foundations of its identity. 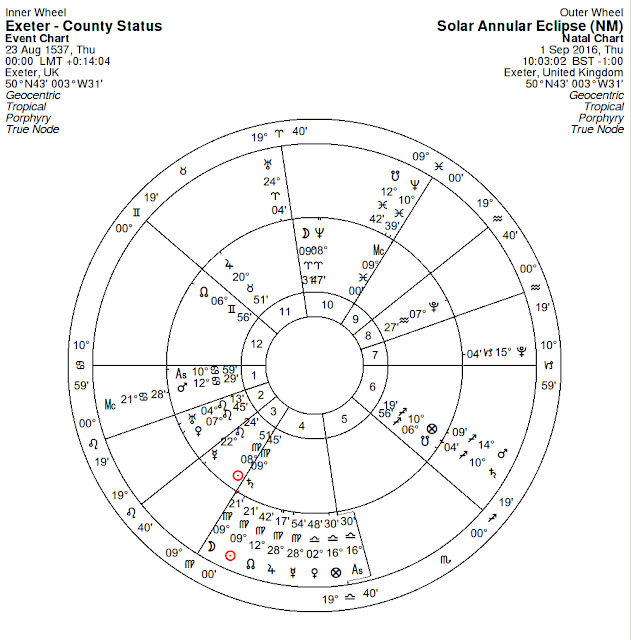 The nodes and also Fortuna will be hit by the next New Moon at 7 SAG 43 in late November. This might signal some minor upturn, such as the switching on of the Christmas lights. Future lunation aspects include the Lunar Eclipse of 11 Feb at 22 LEO 28, exactly conjunct the Charter’s Mercury, and more importantly, the Solar Eclipse of 26 Feb at 8 PIS 12 opposite the Charter’s Sun. Expect major issues following the fire to come to a head around then.
In the context of the event, Saturn well describes the hotel, opened in 1770, as a ’piece of history’, an old traditional structure of dry plaster and timber (Saturn) finally consumed by fire (the conjunct Sun). It was arguably Exeter’s second most iconic building, right in the heart of the city (the I.C.) and just 100 yards across the Green from the most iconic – the Cathedral itself (the Sun). Exeter, a city whose long history dates back to Roman times, is itself commensurate with Saturn and equates numerologically to the Saturn-related number 8 (E+X+E+T+E+R = 5+5+5+4+5+2 = 26; 2+6=8).
On the day, Neptune by transit was on the M.C. opposite at 9 PIS 23. This describes the continuing confusion over why the fire took hold after initially being ‘under control’, why sprinklers weren’t operative, how long the demolition will take, how much of the shell can be saved, even what caused the fire to start, and so on. (The owners have vowed to rebuild with a ‘sympathetic reconstruction’).

The chart for the moment at which the alarm was raised, at 5:00AM, is shown below. 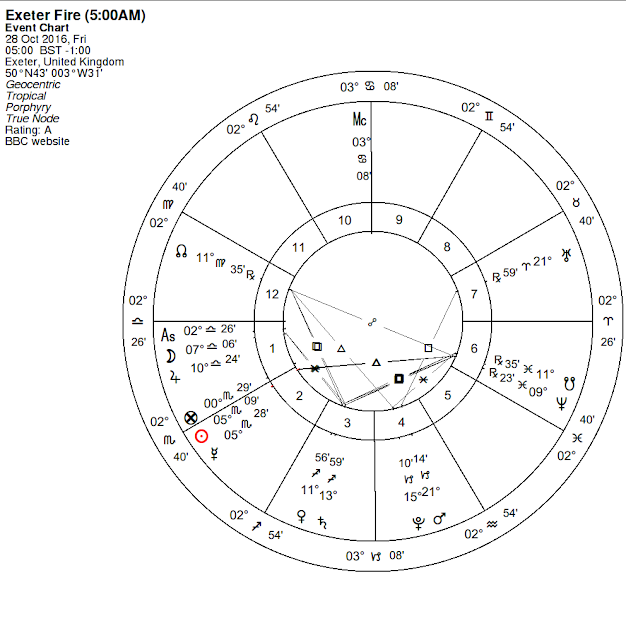 Transiting Neptune at the time of the fire is within two minutes of arc of the solar eclipse degree at 09 Virgo 21.
The New Moon occurred on 30 Oct at 7 SCO 44, in exact T-square to the Charter’s Venus at 7 LEO 45 and opposing Pluto at 7 AQU 27. The fire stated in an art gallery (Venus) two doors down. It spread via roof spaces running across the tops of buildings and set the hotel alight. [This New Moon also falls opposite the ascendant (7 TAU 16) in Exeter’s Royal Charter of 1 Jul 1463.] 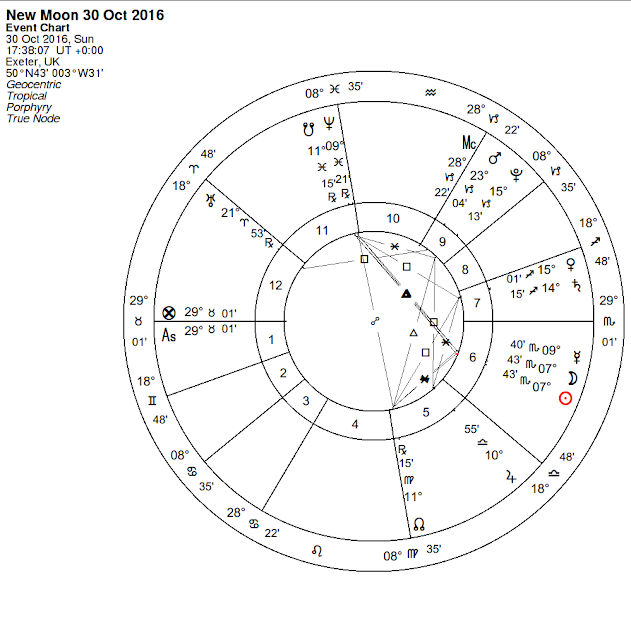 If the chart is turned upside down, with North at the top as in the street map of the city centre, the superimposed Moon’s T-square reproduces the T-square formed by the junction of High Street and Queen Street. The safety cordon that blocked (Saturn) all routes through the centre for a week is located at this axis, where down Martins Lane stands the ruined hotel. Neptune now at the base of the chart can also graphically represent the gas main running under the hotel which fractured on the Saturday morning, intensifying the blaze.
In the weeks following the fire, there has been a tangible air of sadness in Cathedral Green as people confront the reality of the tragedy. It seems to be a sadness much equated with Saturn.
The Aries Ingress 2016 – Exeter
In traditional astrology much store would have been placed in the Aries ingress chart, set for the location of interest, as a guide to the forthcoming year. The following chart shows the moment that the Sun entered the tropical sign of Aries in March 2016 in Exeter. 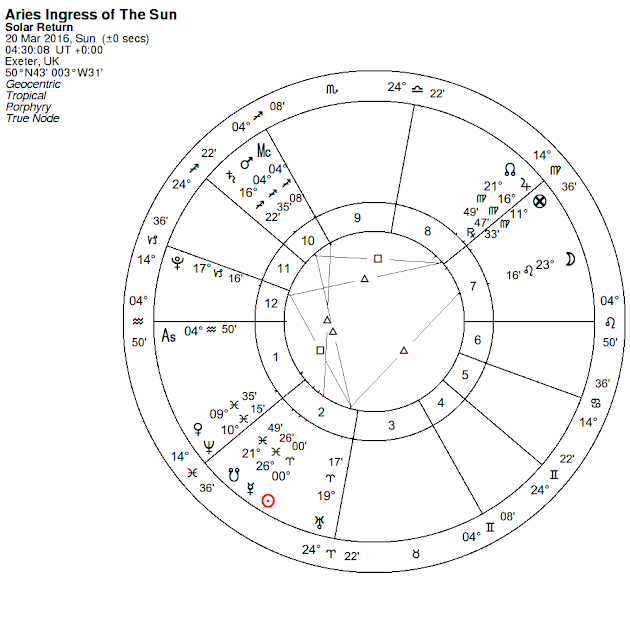 This occurred during the night, at 4:30AM. This means that the chart should be judged as 'nocturnal', according to the principles of sect. This is a striking chart, with the two malefic planets, Saturn and Mars, elevated in the tenth house. Mars is within a few minutes of arc of the midheaven.
The rising degree in the ingress chart is 4 Aquarius. This places Exeter's natal Uranus position on the ingress descendant, with the close Venus-Pluto opposition being brought to the horizon. 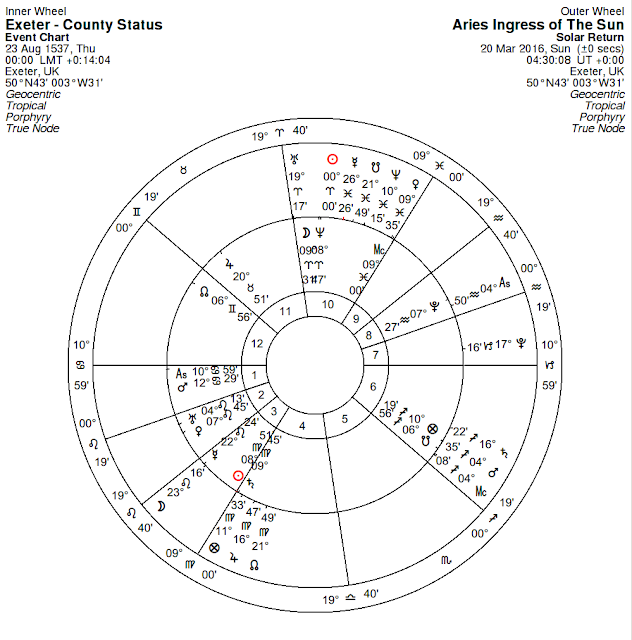 
Mars, as the lesser malefic, being intensely hot and dry, is the planet associated with fires and destructive forces. Saturn, as the greater malefic, being intensely cold and dry, is associated with sorrow and loss. We may infer that the coming year, based on this ingress chart, shows a propensity for loss through fire for Exeter. We should note that the midpoint of the malefic planets is 10 degrees 29 minutes of mutable signs, bringing Venus, Neptune and Fortuna into a close, tense relationship.
This conflicted arrangement in these degrees of mutable signs is made doubly powerful because these degrees are closely associated with Exeter's 1537 chart: the midheaven axis 9 degrees Virgo/Pisces. We have noted that Sun, Saturn, the nodal axis and Fortuna are close to this axis in Exeter's 'birth chart'. In essence, the Aries ingress marks out 2016-2017 as a particularly challenging year for the city.
Other significant features of this ingress chart include the midpoint of the transiting Sun-Uranus combination picking out the city's Moon-Neptune square the natal ascendant. This portends events of great unexpected shock (Sun-Uranus) that will have an emotional impact (Moon-Neptune) on the city (ascendant). The Sun-Uranus midpoint moved on to square the natal rising Mars a few days after the ingress.
Although the fire devastated the historical heart of Exeter, it is important to note that there was no loss of life. The emergency services were able to contain the blaze to a specific area of the city, when there was concern that it may spread beyond this zone to the High Street. The impact on business may be substantial. Our thoughts are with all those affected by the fire including local residents and workers whose jobs depended on the hotel and other local businesses.
Posted by Ed @ EAG at 12:42